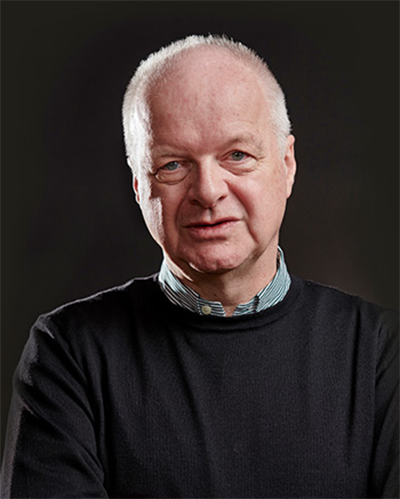 School of Architecture
University of Waterloo

The Impact Award is for me a testimony to the importance of architectural education as an essential part of education in the social sciences and humanities.

Cultural historian and author Robert Jan van Pelt’s deep dive into the history and architecture of Auschwitz has taken concrete form in the much-celebrated installation, The Evidence Room. The installation, first exhibited at the 2016 Venice Architecture Biennale, is a forensic examination of architectural details that prove Auschwitz was designed as an extermination camp. The Evidence Room sums up what van Pelt considers his crowning achievement: serving as expert witness in the 2000 libel suit brought by Holocaust denier David Irving against scholar Deborah Lipstadt and Penguin Books.

Straddling scholarship, law and art, the exhibit draws on a 750-page report that van Pelt submitted to the High Court of England and Wales. The landmark case was “a crucial event in the battle of Holocaust denial,” he says. By proving to the High Court and a 2001 Appeal court that Auschwitz was an extermination camp, “I put my SSHRC-funded research, motivated initially by personal interest, into the service of the public good.”

This research and an account of its presentation in court was reworked in The Case for Auschwitz: Evidence from the Irving Trial. Published in 2002, the book is considered one of the founding texts of forensic architecture, a discipline encompassing architecture, technology, history, law and human rights. SSHRC has funded this research since 1990.

The trial was also the basis for the 2016 film, Denial, one of many films and documentaries that draw on van Pelt’s work.

As a professor in the University of Waterloo’s School of Architecture since 1987, van Pelt has devoted his professional career to exposing the lie of Holocaust denial and to teaching what truly happened during the war years. His research uniquely emphasizes physical evidence, not historical forces, events and people.

While the evidence presented in The Evidence Room reflects van Pelt’s earlier research, its production created new research, notably the unprecedented project to produce three-dimensional plaster casts of two-dimensional architectural drawings, construction documents, and drawn eyewitness testimony. The SSHRC-funded project was a collaborative effort of the School of Architecture faculty and 23 students, including professors Anne Bordeleau and Donald McKay.

The installation led to spin-off exhibitions in Montréal and Ottawa, as well as lectures, documentaries and other presentations. An expanded version was displayed at the Royal Ontario Museum in 2017-18 and was seen by close to 290,000 visitors.

In addition, van Pelt also curated the largest travelling Holocaust exhibition, Auschwitz: Not long ago. Not far away. It opened in Madrid in December 2017 and at the Museum of Jewish Heritage in New York in May 2019. It will tour other cities after its closing in August 2020.

His original approach to Holocaust denial ensures that research—and truth—reaches not only scholars and academics around the world, but the broader public. Its impact will continue to be felt through a new book, The Evidence Room Revisited, supported through the 2019 Connection Award.

The Connection Award recognizes an outstanding SSHRC funded initiative to facilitate the flow and exchange of research knowledge within and/or beyond the social sciences and humanities research community.