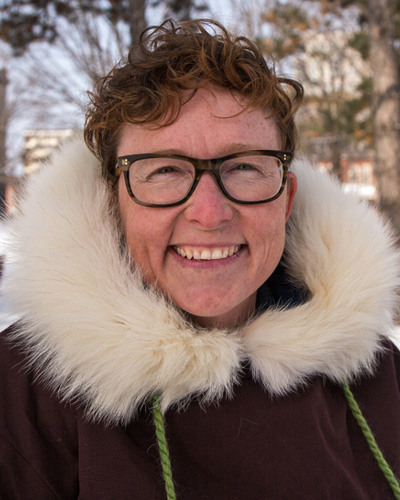 Canada Research Chair in Environment, Society and Policy, and Professor
Department of Geography
University of Ottawa

Jackie Dawson’s first foray into Arctic research began when, as a Grade 9 student fascinated by the feats of explorers, she picked up a book about the adventures of famed Antarctic explorer Sir Ernest Shackleton. Little did she know then that her curiosity about the polar regions would one day see her undertake her own Arctic exploration that would lead to her becoming the Canada Research Chair in Environment, Society and Policy, the Scientific Director of ArcticNet and a member of the Polar Medal Advisory Committee for the Governor General of Canada.

It wasn’t until she was a graduate student and received funding to go to Churchill, Manitoba, to study polar bears that she realized that Arctic research could be her life’s work. “That first trip really sparked my passion for this field and became a pivot point for my studies,” says Dawson. “I discovered just how beautiful the people, wildlife and landscape are and how rich the Indigenous culture is. It made me want to know more.”

Dawson’s interest in the Canadian Arctic was also shaped by working for several years with Indigenous and at-risk youth with Outward Bound. Her studies in New Zealand, where she earned a master’s in business and tourism, reinforced the value of traditional Indigenous knowledge she had first discovered in Canada. Her time working on cruise ships heightened her concerns about the impacts of climate change on polar regions and the resulting increase in shipping, trade and tourism. (Sea ice loss has resulted in a tripling of Arctic shipping traffic in Canada over the past two decades.)

“I think getting experience outside academia brings a lot to your research, as it really humanizes it and underscores the importance of the work you are doing. You lose something if you only live within the academic world,” observes Dawson.

The diverse influences and experiences in her life prompted Dawson to examine the human dimensions of climate change on coastal communities affected by changing environmental and social conditions around the globe. Following completion of her PhD in geography at the University of Waterloo, she launched her groundbreaking, collaborative and interdisciplinary approach to Arctic studies, which involves climate change impacts, vulnerability, adaptation, economic development, innovation, governance and policy. Her research is at the intersection of the human and policy dimensions of climate change, Indigenous community development and oceans governance.

Dawson’s growing concern about disappearing ice coverage in the Arctic Ocean and the growth of shipping in the region motivated her to seek SSHRC funding to examine the impacts on northern communities, initially in Pond Inlet, Nunavut. That led to further research in the area as her project expanded to include 14 Arctic communities.

Dawson and her project team developed innovative shipping models and digital mapping techniques that merged details on ecologically important areas with those on overlapping culturally significant areas, bringing together western science with Inuit and local knowledge.

The goal was to highlight the importance of encouraging sustainable development in Arctic Canada while safeguarding northern ecosystems and respecting the rights and traditions of Indigenous northerners.

The team engaged in extensive outreach across the North through community-based training and participatory mapping workshops. Working in close partnership with northern organizations, they identified and trained 59 Inuit youth, aged 18-31, in research methods and participatory mapping. Dawson’s team hired these newly skilled researchers to conduct mapping workshops with Inuit hunters, Elders, and marine users in their communities to identify important marine areas and impacts from increased shipping.

Dawson is convinced that it is in these partnerships that the true value of the research shines through. “Working collaboratively, we brought together the best of government, science, traditional knowledge and the dynamism and enthusiasm of Inuit youth. This wasn’t about a single academic group trying to publish the next big thing. The knowledge we gathered and published in digital maps can be used to support protected-areas management, promote ecological and cultural sustainability, manage climate change-induced maritime trade, and put Canada on the world stage for its proactive and innovative approaches to oceans governance. It can assist decision-makers in making the best possible decisions for culture, the environment and the economy.”

Beyond the community partners, this research will lead to new data and tools to help understand the human and policy implications of environmental change across the Canadian Arctic. Dawson’s ardent hope is that decision-makers and all Canadians will pay greater attention to these pressing issues, understanding that not just climate change but also technological developments and global power dynamics will have profound impacts on the Arctic environment in the coming years. And the resulting social effects will have major implications for not only our nation but the world.

The Connection Award recognizes an outstanding SSHRC-funded initiative to facilitate the flow and exchange of research knowledge within and/or beyond the social sciences and humanities research community.